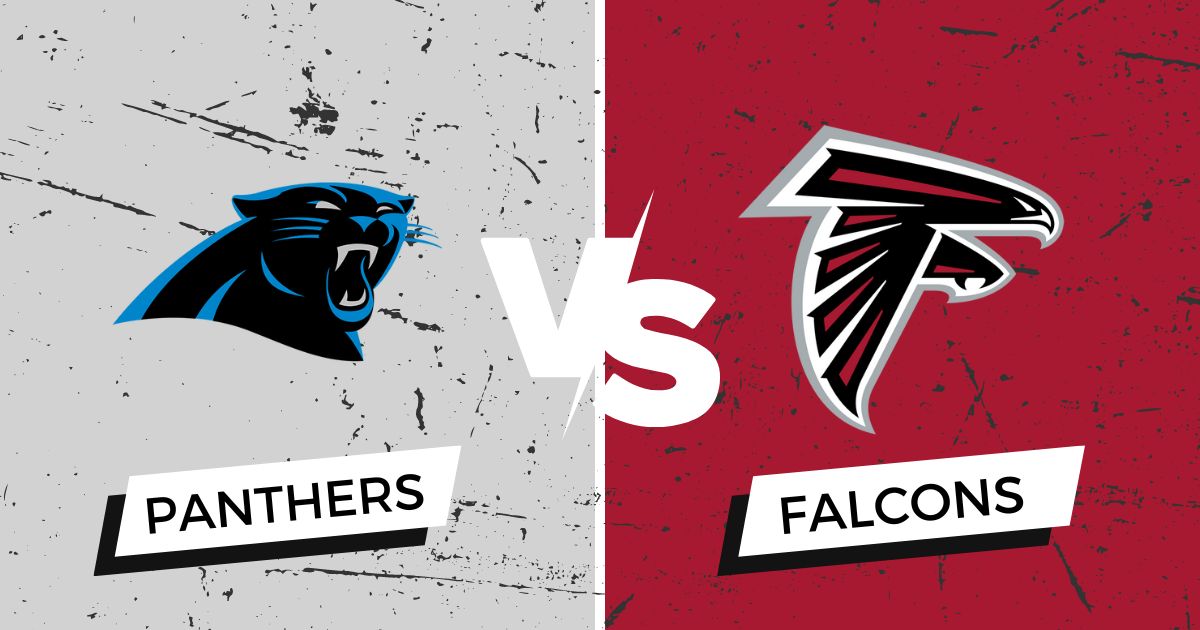 Here is our Falcons at Panthers Betting prediction and pick for this NFL Week 10 matchup.

The 2-7 Panthers were destroyed 42-21 by Cincinnati on Sunday.

The last time these two franchises met was just a couple of weeks ago in week 8, with the Falcons getting a 37-34 victory.

These are the Falcons at Panthers Betting odds, brought to you by YouWager.lv:

As you can see the Falcons are -3 spread favorites to get the victory in Carolina vs the Panthers.

This means that for a wager on Atlanta to be graded as a winner, the team needs to win the game by more than 3 points.

If they win but by less than 3 points, you lose your bet.

When it comes to the Panthers, they are +3 underdogs for this matchup, and this means that they can even lose the game by less than 3 points and you can still collect your profits.

If they lose the game by more than 3 points, you lose your bet.

When it comes to the total, it has been set at 42.5, and this means that you can make a bet on the combined score for this game to be lower or higher than 42.5 combined points.

It’s time for our Falcons at Panthers Betting preview, with an overview of both teams,

Now in this Falcons at Panthers Betting preview, let’s talk about the Falcons.

Atlanta got defeated by the LA Chargers in week 9 and that dropped their record to 4-5 for the season.

They handled the game very well for the first part of the game as they managed to acquire a 10-0 lead, but they allowed the Chargers to take control later on in the game.

Los Angeles ended up winning the game by a field goal as the time was about to expire.

The Falcons are still holding tied for first place in the NFC South with the Bucs, but this is also a team that has proven to be inconsistent lately.

Starting quarterback Marcus Mariota didn’t have a good time in this game as went 12 for 23 for 129 yards and zero TDs, which is equal to a 68.9 passer rating.

If Atlanta wants to have the chance at winning their division, Mariota definitely needs to have a good game versus Carolina.

There is some good news for the team as they got running back Cordarelle Patterson back after the player spend four weeks in IR.

Patterson was able to score two touchdowns, but he was outproduced by rooking running back Tyler Allgeier, who managed to rush ten times for 99 yards, which is great compred to the 13 carried for 44 yards by Patterson.

On the other hand, the Falcons had a hard time getting pressure on Herbert, and they ended the game with zero sacks and just two quarterback pressures.

Falcons at Panthers Betting: Carolina Back Down to Earth

Next in this Falcons at Panthers Betting preview, let’s talk about the Panthers.

Carolina was destroyed by the Bengals 42-21 on Sunday, with Cincinnati getting a 35-0 lead over the Panthers in the first half of the game.

Despite the final numbers for the game, the fact is that the Panthers were fully dominated by Joe Burrow and the Bengals.

This dropped their record to 2-7 on the season and 0-4 on road games.

Runningback D’Onta Foreman managed to rush only seven times for 23 yards, and this is quite interesting if we consider how successful he was the two weeks prior to this game as he managed to total 236 rushing yards and three touchdowns.

It’s likely that the team would want Foreman to be more involved versus the Falcons.

PJ Walker was performing very well before this matchup, but he struggled a lot versus Cincinnati.

Walker started 3 for 10 for nine yards and two interceptions, before he was sent to the bench to give Baker Mayfield a shot.

To the surprise of many, Mayfield performed well as he went 14 for 20 for 155 yards and two touchdowns, which equals to 126 passer rating.

Despite the positive performance by Mayfield, the Panthers are planning to give Walker the start one more time versus the Falcons.

We will need to wait and see if he managed to complete the full game or if he gets replaced by Mayfield again.

Last but not least we have our Falcons at Panthers Betting pick:

In previous weeks, bettors were feeling comfortable picking Carolina, and the main reason for that was Carolina’s great defensive line.

But after the team allowed 79 points in the previous two matchups, the Panthers defense is not very reliable.

With McCaffrey absent, many questions on the quarterback, and a defensive line that is currently regressing, Carolina seems to be in tanking mode right now.

The Falcons are not very impressive as of late, but they did manage to get the victory over the Panthers a couple of weeks ago, and we truly believe they are on their way to defeating Carolina one more time.