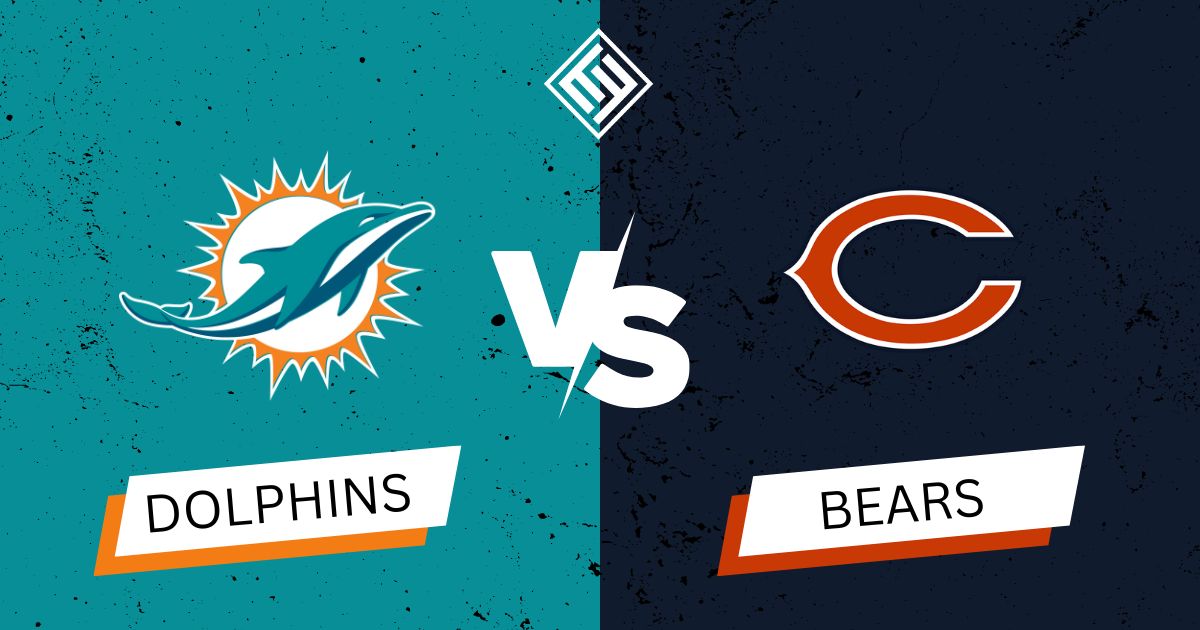 Here is our Dolphins at Bears Betting prediction and pick for this NFL Week 9 matchup.

These are the Dolphins at Bears Betting odds, brought to you by YouWager.lv:

The Dolphins are 5-point spread favorites to win this game on the road. This means that Miami must win the game by more than five points for you to collect your profits.

If the team wins but by less than 5 points, you lose your wager.

The Bears are the underdogs for this game at +5. This means that Chicago can even lose the game by less than five points and you can still collect your profits.

If the team loses by more than five points, you lose your bet.

It’s time for our Dolphins at Bears Betting preview for both teams.

Now in this Dolphins at Bears Betting preview, let’s talk about the Dolphins.

Miami defeated Detroit on Sunday, and that victory makes them 5-0 on the year with Tua Tagovailoa as their starter.

This is quite significant as the team went 0-3 during the time Tua spent out of the field recovering from an injury.

Right now, Tagovailoa leads the full league in QBR, and he is ranked just ahead of Patrick Mahomes and Josh Allen.

This is similar to the previous 2 years where the Fins went 14-8 in matchups where Tua was the starter and 4-7 in games he did not.

Much of Tua’s success can be attributed to his two main targets Jaylen Waddle and Tyreek Hill, who managed to combine for twenty catches for 294 yards and 2 TDs.

On the year, Waddle and Hill have a total of 111 receptions for 1688 yards and seven touchdowns in eight matchups.

That being said, this is a team that is still trying to make its defense as better as possible with the goal of establishing themselves as one of the best franchises in the NFL.

They are taking things seriously in this respect, and a clear example is a team trading their 2023 first-round NFL draft pick for superstar LB Bradley Chubb.

Let’s continue this Dolphins at Bears Betting preview by talking about the Bears.

Chicago got defeated by Dallas 49-29 on Sunday. The offense for this team seems to be improving with every game, sadly, we can’t say the same about their defense, which had it’s the worst performance of the season vs the Cowboys.

The team also lost linebacker Robert Quinn as the player got traded to Philly just a week prior to the game, and Quinn’s absence was definitely noticeable.

Another bad move for the Bears in the middle of the season was trading DE Roquan Smith to Baltimore.

With these moves, the defensive line for this team went from a top ten united to a bottom five, and this truly signals a team that is currently tanking.

That being said, the team also traded for wide receiver Chase Claypool from the Steelers.

It is quite interesting to trade a second-round pick for a WR that is currently underperforming in a season where they are on their way for a total rebuild.

It’s not difficult to think about how this game is going to go. The Fins have not yet lost with Tua as QB1.

We can also add the addition of Bradley Chubb to elevate Miami’s defense in support of an offensive line that is quite lethal.

Chicago’s offense is improving, but as of now, it can be considered mediocre, particularly when compared with Miami.

And, with a defensive line that is quite poor, this is a team that will be lucky if it can win at least one more before the season ends.