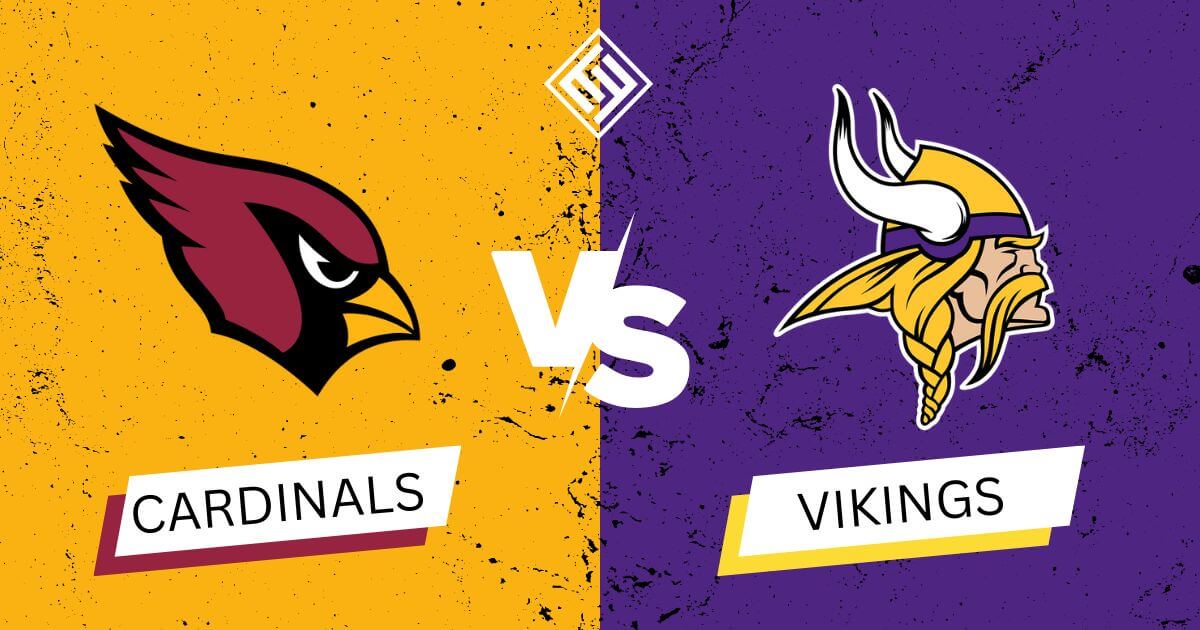 Here is our Cardinals at Vikings betting prediction and pick for this NFL Week 8 matchup.

The Cards had a difficult time in week 7 as they got defeated by the Saints 42-34.

The Vikings were on their bye during week 7 and are currently 5-1.

The last time these two teams saw action with each other was September 19,2021, with Arizona getting the 34-33 victory.

These are the Cardinals at Vikings Betting odds, brought to you by YouWager.lv:

The Vikings are 3.5-point spread favorites to get the victory at home. This means that the team needs to win by more than four points for you to collect your profits.

If Minnesota wins the game but by less than 4 points, you lose your wager.

The Cardinals are the underdogs for this game at +3.5.

This means that you can place a bet on Arizona and the team can even lose the game by less than 4 points and you can still win your bet.

If the team loses the game for more than 4 points, you lose your bet.

When it comes to the total, it has been set at 49 points for this particular game.

This means that you can bet on the combined score for both teams at the end of the game to be superior or inferior to 49 total points.

Arizona Heating Back Up

Arizona was able to defeat NOLA by 42-34 and that victory improved their record to 3-4 for the current season.

Star WR DeAndre Hopkins had the chance to make his season debut and finished the game with a total of ten catches for 103 yards.

Running back Eno Benjamin, a seventh-round pick from 2020, also experienced a great game. Benjamin finished with 92 yards for 12 rushes and a single touchdown.

And it’s important to recall that he is definitely a player that continues to improve every week.

In the meantime, when it comes to defense, the Cardinals were able to dominate the Saints for the big part of the game.

Arizona’s D-line was able to pick up Andy Dalton a total of 3 times, and that includes 2 that were returned for TDs.

But at the very same time, Arizona was getting crushed with big plays and they ended up allowing a total of 34 points.

So, needless to say, if they want to win this game, they need to focus a lot more on their defensive efforts.

Minnesota Running Away with Division

Next on this Cardinals at Vikings Betting preview, let’s talk about Minnesota.

The Vikings were on their bye during week 7, and are currently 5-1.

During their bye, Green Bay lost again and dropped to 3-4.

This means that the Vikings are now the solid leaders of the NFC North and are the favorites to take the division.

If they manage to win those two, they will be 7-1 on the season.

The Packers are playing Super Bowl favorites the Bills next week, so the Vikings’ chances of staying number one are quite solid.

Now, the D-line for the Vikings is mostly responsible for their current success.

While their offensive line is full of superstars such as Dalvin Cook and Justin Jefferson, the key has been the defense as it has allowed them to close games.

Out of their 5-1 record, this team is currently on a 4-game winning streak, and those four games were won by a single score.

Indeed, this is a team that is showing discipline on both sides of the field, and the Vikes are also the team in the NFL with the least penalizations.

Last but not least, our Cardinals at Vikings Betting Prediction & Pick.

The Cardinals are a tougher team than what their current record shows, and let’s not forget that they have DeAndre Hopkins back.

They definitely have a good shot at winning this game, but the Vikings are coming from their bye and are well-rested. Plus, the Vikings will be playing this game in Minneapolis.

Overall, this should be a very competitive game with both squads throwing the ball down the field a lot.

Thank you for checking out our Cardinals at Vikings Betting preview, best of luck with your future action!