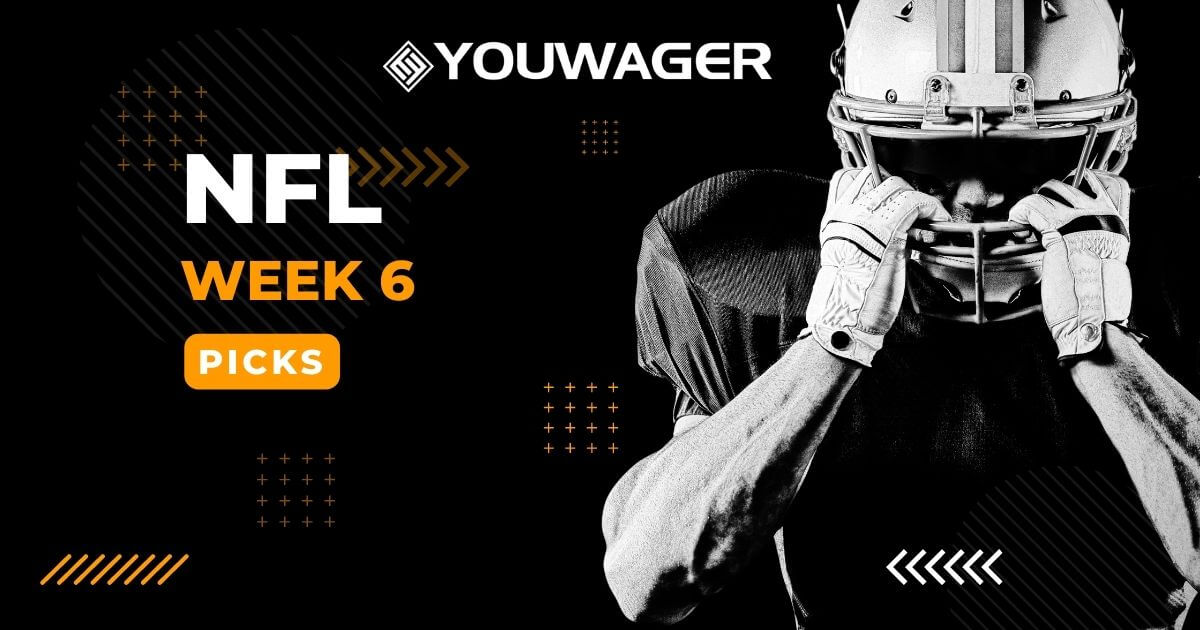 These are our NFL Week 6 Betting Picks, agree or disagree? Let us know on Twitter!

We are heading to the sixth week of pro football action, and by this time it’s likely that most bettors have already formed a solid opinion.

First in this NFL Week 6 Betting article, let’s see why getting action with the earliest lines is the best way to go.

So, once the top guys start getting action on a given line, you will immediately see how those lines change to start favoring the sportsbook.

For that reason, it is key that you pick up the earliest possible lines because those great picks won’t be available for long.

That being said, it’s key that you consider key factors such as injuries.

If there is a particularly good line you like, but when you read injury information for the team, one of the top players on the roster is not playing at 100% of his talent

The Cowboys are in the zone after they managed to defeat the current Super Bowl champions, the Rams.

Now in this NFL Week 6  Betting article, let’s analyze the game between the Panthers and the Rams.

Let’s start by saying that Carolina is the worst team in the league right now.

In fact, things just got even more difficult for the direction of this team as Matt Rhule is out of the team as of this moment.

Baker Mayfield has underperformed since he arrived in Carolina.

And lately, he was seen wearing a walking boot on his left foot as he got injured during the game versus the 49ers.

So, even with a healthy Baker, chances are that Carolina still remains a very bad team.

When it comes to the second string, Sam Darnold continues to recover from an ankle sprain.

That means that the Panthers will have to use their third-string quarterback PJ Walker just in case Mayfield is not able to perform.

The Rams are coming from a second straight defeat as they fell to the Cowboys and the Niners.

That being said, LA is still a better team than Carolina, particularly on the defensive side.

The line right now is -10, and it can get higher as game time approaches, so make sure to pick it up now!

Read our story on the Top 10 NFL Wide Receivers.

Now in this NFL Week 6 Betting preview, let’s check out the game between the Niners and the Falcons.

The Falcons are playing above their weight class as they were set as one of the worst teams in the league before the season started.

But they have managed to cover the spread in all of their five meetings so far.

This includes covering versus the Buccaneers on Sunday.

The team was losing by 15 points by the half, but they managed to recover, closing the gap in the fourth quarter to a 21-15 loss as +8 underdogs.

Atlanta is back home for Week 6, and they are set as +6 underdogs for this particular matchup.

When it comes to the Niners, the team just defeat the Panthers, and they seem to be picking up some steam.

This is clear by their current numbers as they just acquired back-to-back victories, and have also won 3 of their last four.

On the negative side for San Francisco, DE Nick Bosa is the latest big-name injury for the team, and this can be quite significant moving forward until Bosa is able to return.

Now, if you wish to bet ATL as underdogs, you can pick up the line now at +6, or you can wait a little longer just to see how the line moves even more in your favor.

Next in this NFL Week 6 Betting preview, let’s talk about the best pick for the game between the Cowboys and the Eagles.

Fans of the Cowboys definitely want Dak Prescott back, no doubt. But Cooper Rush is doing a great job as the starter as Dallas are 4-1.

Now they are headed probably to their toughest test so far as they are facing the undefeated Eagles in what promises to be an outstanding clash between the top two teams in the NFC East.

The success of Dallas is definitely tied to the groundwork, and this was clear vs the Rams as they pounded LA for 163 yards on 34 carries.

Philly is also favoring the run this season, but let’s not forget that Jalen Hurts is the heart of this team, and he has also acquired some important moments as a true leader.

Dallas has also not allowed a rival to top twenty points.

And, with a lot of defensive action between the two teams, chances are that the score will not be very high for either team.

In such a case, we are recommending you take the Under 43.

Last but not least in this NFL Week 6 Betting article, let’s cover the game between the Bears and the Commanders.

The total for this game started at 40, and it has moved down to 38 since then.

The offense for the Bears has been the source of laughs all over the web.

But Justin Fields seems to be finding his form and he was able to do damage to the Vikings with his legs and arm during the second half of the game.

Fields managed to complete 71.4% of his throws, averaging 9.9 yards per attempt.

Indeed, this is a very nice improvement from his performances for the previous 4 weeks.

And we can pretty much say the same thing for the Commanders, who have scored a low 35 points total in 3 weeks of action.

They managed to score seventeen points in their Sunday defeat to the Titans.

That being said, they did manage to outgain Tennessee 385-241.

This game could have ended in a win for Washington, but their bad luck didn’t help as Carson Wentz suffered a goal-line INT that killed their chances in the last play of the game.

All that being said, we truly think this is also going to be a low-scoring meeting, and for that reason, we are recommending you take the Under 38.

Thank you for checking out this NFL Week 6 Betting article, we wish you the best of luck with your final picks!