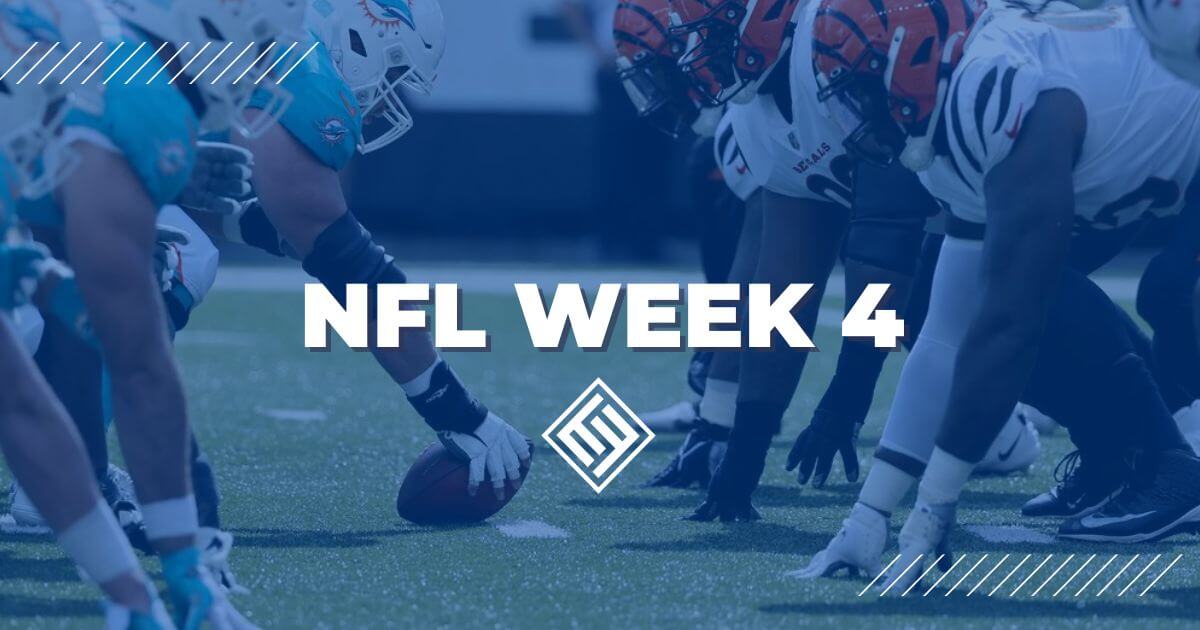 In this NFL Week 4 Betting Odds article, you’ll find a preview of each game, including early spread lines and totals. All info brought to you by YouWager.lv.

Week 3 was definitely great to bet underdogs as teams such as the Bills and the Chiefs lost their respective matches.

The teams not only didn’t cover, but they also lost to the Colts and the Dolphins.

And let’s not forget about the Jaguars!

With Justin Herbert not playing at his full capacity, Jacksonville took advantage and grabbed a valuable road win in LA.

These are the NFL Week 4 Betting Odds for all games taking place in the fourth week of action of the current NFL regular season:

These are the NFL Week 4 Betting Odds and a brief preview for the TNF clash between Miami and Cincinnati.

The Bengals opened up as -4 favorites vs Miami, but after a solid current campaign by the Fins, the line has moved to -3.5 since.

These are the NFL Week 4 Betting Odds for all the games scheduled for Sunday, October 2, 2022:

Now in this NFL Week 4 Betting Odds article, a preview of Bills at Ravens.

Despite Buffalo losing their first game of the season vs the Dolphins in Miami and the Ravens coming from a victory over the Patriots, Buffalo remains favorites for this game.

And that is -3.5 road favorites! Lots of points are expected between these two as the total for this game has been set at 52.

Lamar Jackson is currently on fire as he left Foxborough with 5 touchdowns. And a clash vs Josh Allen will really give us a glimpse of who can actually get the MVP trophy at the end of the season.

Both of these squads are currently 2-1 ATS but the best bet here is probably the Bills as they are 6-1-1 after a SU loss.

When it comes to the Ravens, they are 2-9 in their previous 11 after an ATS victory.

Check out our article on the best wide receivers in the NFL right now.

Next in this NFL Week 4 Betting Odds piece, is a preview of Jaguars ar Ravens.

After going 3-0 in their first three weeks of action, the Eagles now look like legitimate contenders to win the NFC.

They just defeated the Commanders in a game where their defensive line recorded an outstanding 9 sacks.

While a lot of people believed that the Eagles were a serious threat coming into the new season, very few expected the Jaguars to start the season 2-1.

The Jags are currently on fire, and they are coming from destroying the Chargers on the road.

So, this time around Trevor Lawrence and Jacksonville can’t be disqualified so easily.

These teams are both 2-1 ATS heading to their Week 4 clash.

The total for this game has been set at 48 over/under.

Here is an article on the best-paid players in the NFL.

The Cowboys opened as -6 favorites for this game, but a lot of things have changed since then.

First Dak Prescott is suffering a thumb injury and will remain sidelined for now.

So, it will likely be Cooper Rush who will be taking the first-string duties while Dak returns.

The team also feels strong after straight victories over the Bengals and the Giants respectively.

Washington is coming from a defeat to the Eagles, with Carson Wentz getting sacked 9 teams and only 8 points scored.

The Commanders are also 1-4 ATS in their last 5 games in Dallas.

The total for this game has been set at 42.5 over/under.

With both teams at 1-2 after 3 weeks of NFL action, the Lions are -6 favorites for this one vs the Seahawks. This is considerably important as Detroit opened up as a slim -1 back in the spring.

The Lions are coming to this game after losing the Vikings in the last second in what it was a very good performance for them.

Something Detroit is doing this season is keeping other squads close, and that has led to a current 3-0 ATS record.

With that said, it is important to keep an eye on D’Andre Swift as he left week 3 after getting injured.

When it comes to Seattle, they lost to the Falcons in Week 3 and are currently 1-2 ATS.

And, if we look back into history, we can realize that the Seahawks are not particularly good when performing outside Lumen Field, holding a 5-11 ATS record in their previous sixteen games on the road.

Lots of points are also expected for this one by the oddsmakers as the total has been set at 50.

The Steelers are opening as -3.5 favorites to get the victory over the Jets at home.

The potential main story heading to this game is the return of Zack Wilson as the starter for New York.

The young quarterback was forced to miss the start of the season as he was dealing with a knee injury that he was carrying since the preseason.

When it comes to Pittsburgh, the team handed the first-string quarterback duties to Mitch Trubisky, but after some struggles, the voices that are calling for Kenny Pickett to become the starter are louder and louder each day.

Although the Steelers are 1-1-1 ATS, they have been performing well at home in front of their crowds.

And, since Mike Tomlin was named head coach in 2007, Pittsburgh has managed to cover 54.8% of its game at home. And that is the best 5th-mark in the league over that particular stretch.

This line opened up as -5.5 favoring the Packers, but after the performance of the Patriots during the current season, and also due to Ma Jones’ ankle injury, the line is now as high as -10.5.

If Jones misses this clash, it will be Brian Hoyer who will be taking on the quarterbacking duties for New England vs Green Bay.

But even with Mac as their starter, the truth is that the Pats are no longer a team truly worth betting on.

In fact, New England is 1 of just 3 squads in the league without an ATS victory as they are currently sitting at 0-2-1 ATS.

When it comes to the Packers, they are 2-1 ATS this current season, and they are 8-2 ATS in their previous ten games at home.

Despite currently being 0-3, the Raiders are favorites at home vs the Broncos, who are arriving from a close victory 11-10 over the 49ers.

These two AFC West teams have been underwhelming this current season.

Although the Broncos currently count with 2 wins, this is really an offensive line that lacks the explosiveness many expected with Russell Wilson as their starter.

That being said, the Raiders are currently 0-3 to start the Josh McDaniels era, and this is kind of a must-win situation for a team that counts with the services of Avante Adams.

Combined, these two squads are 1-5 ATS this year.

The total for this game has been set at 44.5 over/under.

Minnesota is -2.5 road favorites over the Saints.

This line opened up at an even pick’em, but after the performance of both of these teams during the current season, this line has jumped, first to -1 and now to -2.5.

The total for this game has been set at 44.

The Browns are -2.5 favorites to beat the Falcons on the road.

This line opened up at -3, but it moved half a point to favor Atlanta since then.

The Falcons are turning out to be an outstanding bet this current season as the team is 3-0 ATS in 2022.

The total for this game has been set at 48.

The Chargers are opening as -5 road favorites to get the victory in Houston over the Texans, the underdogs.

This line was as high as -8.5, but the unclear status of Justin Herbert, and the fact that LA got blown away by the Jaguars at home, give Texans fans a bit of hope about getting the victory this time.

And to add to that, Rashawn Slater and Joey Bosa suffered injuries during the game, and their status for week 4 is not completely clear.

The Texans are 2-0-1 ATS this current season, and they are also 5-0 ATS in their last 5 games versus AFC teams.

The over/under for this game has been set at 44 over/under.

The Colts spread for this game went as high as -4 for this game before the season, and following the events of the current season, the line has dropped to -3.5 to -3.

Indy grabbed a very important victory over the Chiefs at home, while the Titans also grabbed a victory of their own over the Raiders.

When it comes to the head-to-head between these two teams, it is Tennessee that has the upper hand as they won 4 out of their last 5 ATS.

And, for what is worth, the road team in the last seven meetings between these two is 6-1 ATS.

The over/under for this clash has been set at 42.5.

The Giants -3 line has remained the same since it opened in spring, and it is still the same even after NY’s loss to the Cowboys on Monday night.

The Bears managed to get a home victory over Houston during Week 3, but they didn’t cover and are currently 1-1-1 ATS.

Chicago is also1-4 ATS in their previous 5 games on the road.

The total for this game has been set at 39 over/under.

The odds for this particular game flipped to favor the Panthers!

The line in the spring opened as the Cardinals -3 favorites, but as of Wednesday, September 27, the line has turned to favor Carolina, who are now -2.5 favorites to get the victory at home.

Despite counting with a current 1- 2 record, the Panthers were able to come up with an impressive victory over the Saints this past Sunday.

And, when it comes to Arizona, their performance has been a bit underwhelming with the offensive line managing to acquire just 4 field goals versus the Rams.

The Cardinals are 1-4 ATS in their previous 5 games, but Carolina has not been spectacular at all either as they are 0-4 ATS in the previous 4 games after a SU victory.

This was really a pick’em situation back in the spring, but the Niners have moved to -2.5 favorites over LA now.

The Rams are coming from a 20-12 road victory over the Cardinals while San Francisco suffered a close 11-10 defeat to the Broncos.

That being said, it is the 49ers that are currently leading the head-to-head between the two franchises as they are 5-0 ATS in their last five games.

In San Francisco, the Rams are 2-5 across the spread in their previous 7 trips.

The total for this game has been set at 42.5 over/under.

Thank you for checking out this article on NFL Week 4 Betting Odds, best of luck with your football action!