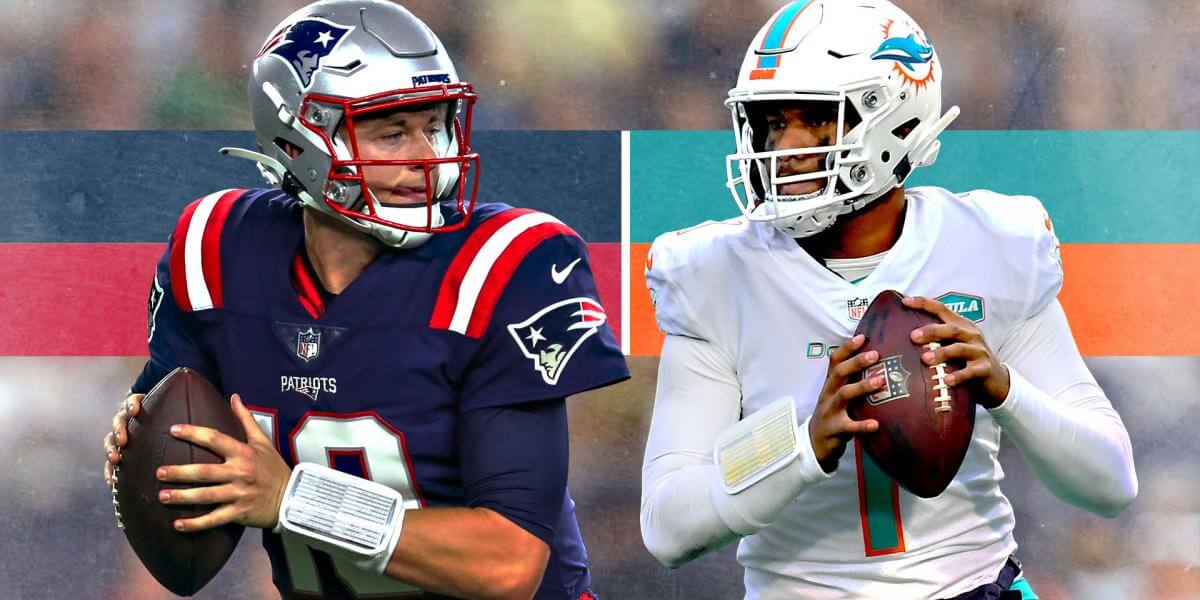 Here are the Patriots at Dolphins Betting Odds and game review for this AFC East clash.

This is the third time in a row that these two franchises start their regular seasons facing each other.

The previous two took place in Gillette Stadium. But this one will be taking place at Hard Rock Stadium, on September 11, 2022.

Here are the Patriots at Dolphins Betting Odds for this game, brought to you by YouWager.lv

As you can see, Miami is opening as -2.5 home favorites with the total set at 44.5 over/under.

Here is the Patriots at Dolphins Betting preview!

On paper, the fins are looking better than the Pats heading to their NFL Week 1 clash.

The Dolphins are also likely to do a better job when it comes to protecting QB1, Tua Tagovailoa.

Plus, the Fins have a new head coach in Mike McDaniel, who is considered one of the most creative HCs in the league.

And McDaniel probably feels great about his new job as he will count on a lot more talent than the previous head coach.

Apart from an outstanding receiving corps, Miami will also count on high-caliber running backs such as Raheem Mostert and Chase Edmonds.

Edmonds is a pass-catching specialist and Mostert always represents a threat for big plays.

Plus, Miami also has Sony Michel to pick up first downs and good chunks of yards.

Needless to say, the Fins are going to be a lethal crowd that will be tough to defend by rival teams.

All that being said, if this team has any chances to have any success in 2022 will all depend on Tua Tagovailoa.

Tua will be entering a make-or-break 2022-23 season in what is going to be his third year as the starter for Miami.

If for some reason he finds himself struggling or gets injured, the Dolphins still have Teddy Bridgewater to assume QB1 responsibilities.

Tyreek Hill is #5 on our list of the league’s best wide receivers.

The Dolphins first played the then Boston Pats back in 1966 in what it was the inaugural game for the Fins. The Patriots went on to get a 20-14 victory.

The first victory for Miami over New England came during their third overall meeting.

The last time these two met was in Week 18 last season when the Fins defeated the Pats 33-24 at Hard Rock Stadium.

The largest victory margin between these two franchises came in 1972 when the Fins managed to defeat New England 52-0 on their way to the team’s only perfect season to this day.

But the Pats got their revenge in the 2019 season as they defeated Miami 43-0, the biggest margin of victory for New England over the Dolphins.

Let’s now take a look at how these two teams compare each other in terms of offense and defense:

Now in our Patriots at Dolphins Betting preview, the results for the last five games for both teams:

The Patriots and Dolphins play Week 1 this season!

Dolphins fans, keep this ON REPEAT#FinsUppic.twitter.com/jGHySDaRaV

Thank you for checking this article on Patriots at Dolphins Betting odds and game preview, best of luck with your action at YouWager.lv!