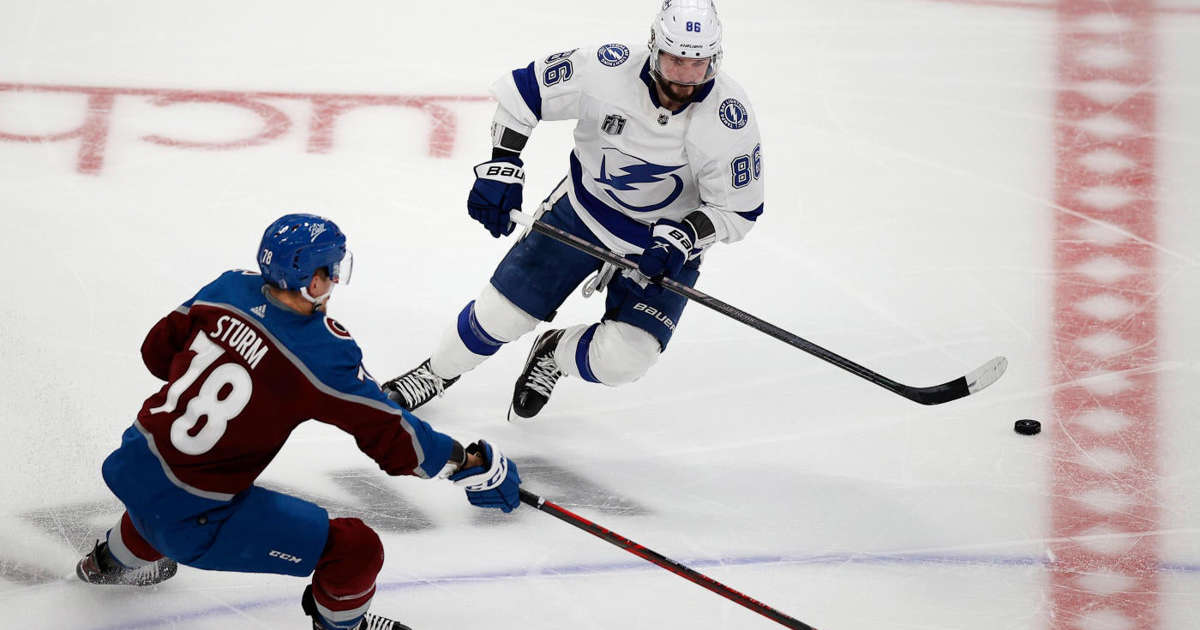 The Lightning fought hard during the first game of the 2022 Stanley Cup Final, even taking the game to overtime, where they finally lost 4-3 to the Avalanche at Ball Arena.

Now Tampa is ready to attempt to even the series on June 18, when they take on Colorado for the second game of this exciting series.

The Lightning start was horrible during game 1, allowing 3 goals in the first period.

Then they managed to storm back to force OT.

Andre Burakovsky scored the defining goal in overtime, granting the Avalanche the victory and the series lead.

Now the Lightning has opened their eyes, and they know that they must play better if they want to avoid a series sweep.

Here are the odds for 2022 Stanley Cup Final game 2, brought to you by YouWager.lv:

As you can see, the Avalanche are -1.5 favorites to take game 2 at home, with the total set at 6 over/under.

Why the Avalanche Can Win

Coming to the first game of the 2022 Stanley Cup Final well-rested after sweeping the Oilers, Colorado demolished Tampa in the first period.

Cale Makar and Nathan MacKinnon are the big names here, and Mikko Rantanen, Gabriel Landeskog, and Arturi Lehkonen are all playing well offensively.

Rantanen managed to achieve 92 points during the regular season, and MacKinnon finished with 88, despite not playing a total of 15 games.

MacKinnon has eleven goals in the postseason, while Lehkonen has seven, and Landeskog scored his ninth during game 1.

The team overall has scored 69 goals in 15 playoff games, including 22 from the Edmonton sweep.

Why the Lightning Can Win

This is probably the best tip that can lead you to make a wise bet for game 1 of the 2022 Stanley Cup Final:

The Lightning is 5-2 in the previous 7 meetings in Colorado.

And the team plays its best hockey when they are against the wall, like now.

As clear proof was their series to the Rangers, going down 0-2, to then win 4 straight games.

Plus, goalie Andre Vasilevskiy is always proficient during the playoffs. And he has a lot of protection from rising young star Mikhail Sergachev and Norris Trophy finalist Victor Hedman.

Hedman actually earned those honors back in 2018, and he is one of the players with the best reach in the NHL.

Plus, Sergachev has blocked an impressive 62 shots during the postseason.

The Tampa Bay Lightning and the Stanley Cup

If they manage to win the 2022 Stanley Cup Final, the Lightning has the chance of cementing themselves as one of the best NHL dynasties in history.

If they actually manage to win the title this year, they will be earning their third straight Stanley Cup victory, a feat that only a few imagined possible in the sport’s modern era.

In the history of the National Hockey League, only 3 franchises have managed to win 3 straight titles for a total of five times. The Maple Leafs and the Canadiens did it twice, and the Islanders were able to make it once.

As you can see, this is a selected, elite list, and Tampa has the rare opportunity of adding their name to it.

That being said, if the Lightning actually wins the title and accomplishes the feat, they will have done it under much more difficult circumstances as their predecessors.

This is a very different NHL

Let’s start with the fact that the salary cap was non-existent when those dynasties were created.

That certainly made it easier for a team to retain a superstar player for a decade, or even for the full time of their professional careers.

And that also means almost no financial tough decisions, which led to overall stability.

Let’s also consider what the NHL actually looked like for those runs.

And the postseason consisted of just 2 rounds: starting with a semifinal and ending with the NHL Final.

Back in 1974, the league expanded to a total of eighteen franchises, including the Islanders, who entered the NHL in 1972.

By the time New York started their run, the NHL was already comprised of 21 teams.

Now, there’s been a tough salary cap since 2005-2006. Plus, the Lightning has gone through 2 expansion drafts in recent times, with the league growing to a total of 32 teams.

So, that mix of salary and expansion has made it truly difficult for a team to win titles in a row.

The only other team apart from Tampa to have won at least two straight titles in the cap era are the Penguins, who did it back in 2016 and 2017.

But Pittsburgh’s aspirations for a 3-peat turned to smoke when they fell to the Capitals in the second round.

Let’s also throw the financial constraints related to the Covid-19 pandemic, and what Tampa is doing turns even more special.

Throwback to the Lightning becoming the 2021 STANLEY CUP CHAMPIONS!!!#GoBolts pic.twitter.com/KFT1hhGXXI

2022 Stanley Cup Final: Avalanche Wants to Star A Dynasty of Their Own

This is one of the most evenly-matched finals series we’ve seen in a while, there is no question about it.

Colorado possesses a very deep roster, and they defeated Tampa in their two regular-season clashes.

Needless to say, this is a very capable group. And they are also only the 8th NHL franchise since 1987 to have suffered only two postseason losses before the 2022 Stanley Cup Final.

Now, it is clear that Andre Vasilevskiy is a better goaltender than Darcy Kuemper.

But if Kuemper is able to remain healthy, the veteran is totally capable of keeping his net clean of goals.

And he has proven how well he can perform as he faced two of the top 5 scoring offenses in the NHL during the playoffs in the Blues and the Oilers, winning the goalie fight against his rivals.

Can Colorado start a dynasty of its own by winning the 2022 Stanley Cup Final?

In order to achieve that feat, the Avalanche will have to defeat the Lightning, a team that has won 2 consecutive NHL titles, and that has won eleven straight postseason series.

If they actually manage to beat Tampa, there is no question that they have what it takes to start dreaming of the possibility of joining the exclusive NHL dynasties club.

Another reason why this team can aspire to legendary things is that the core of their best players is 26 or younger. This includes Cale Maker, Mikko Rantanen, and Artturi Lehkonen. Plus, Gabriel Landeskog is only 29.

As you can see, it is clear that the building blocks for that dynasty are all in place.

All these young Avalanche stars have to do now is to win the biggest series of their careers.

Difficult, but not impossible.

Thank you for checking this piece on game 2 of the 2022 Stanley Cup Final, feel free to read more sports content here.