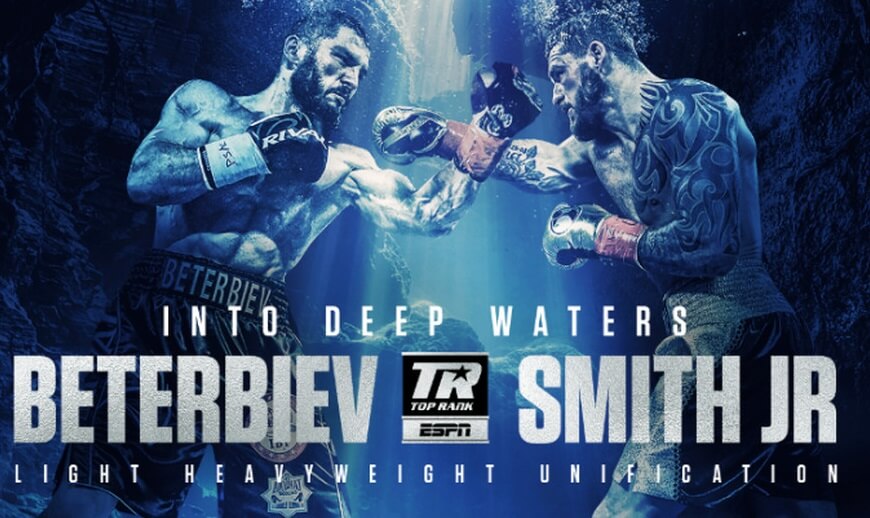 Get the latest Beterbiev vs Smith Jr Betting Odds, and check out a brief preview of this outstanding boxing unification bout!

Artur Beterbiev is the big favorite for the light heavyweight unification bout versus Joe Smith Jr!

Beterbiev holds the WBC and IBF titles, and he will be trying to strip Smith Jr away from his WBO title.

This bout is scheduled to take place on Saturday, June 18, 2022, at Madison Square Garden.

Here are the Beterbiev vs Smith Jr Betting Odds, brought to you by YouWager.lv:

Oddsmakers are favoring Beterbiev to take the victory over Smith Jr.

And the reason is probably that he has turned into one of the most exciting fighters on the scene right now. But mostly, because he holds an impressive 17-0 undefeated record, all obtained by KO.

Joe Smith Jr, on the other hand, is coming from winning a fight over Steve Geffrard back in January, and he is also on a fantastic 4-victory streak.

So, Beterbiev will be looking to hand Smith Jr his first defeat since the latter lost to Dmitry Bivol back in 2019.

Artur vs Joe Betting: Who to Choose?

It is normal for Beterbiev to be the favorite, and he even holds similar odds for his victory fight over Marcus Browne.

That was just the second professional loss for Browne after his defeat to Jean Pascal back in 2019.

When it comes to Smit Jr, things are totally the opposite as he is used to getting negative odds from oddsmakers.

But just because he is qualified as an underdog, it doesn’t mean he is actually going to lose!

In fact, Smith Jr was a +133 dog when he defeated Eleider Alvarez back in 2020, a bout Smith managed to win by KO.

Let’s also not forget that his fight vs the current number one ranked light lightweight boxer in the world, Dmitry Bivol, went to a decision.

And, just in case you’re not following boxing closely, Bivol is only the second fighter to have handed Canelo Alvarez a loss, the other coming from Floyd Mayweather.

Having said that, this time, the best bet seems to be Beterbiev to KO Smith Jr on June 18.

And, if he actually manages to KO Smith Jr and wins this fight, Beterbiev will definitely be catapulted to the top ten of the pound-for-pound boxing rankings.

So, do you think Beterbiev as the favorite can finish Smith Jr with a knockout win?

Or will Smith Jr, the underdog, surprise everybody and hand Beterbiev his first loss?

He remains the only world champion with a 100% KO rate 🤯 pic.twitter.com/6mGHtrBAxg

We wish you the best with your Beterbiev vs Smith Jr wagering action and don’t forget to bookmark us for up-to-date sports content.