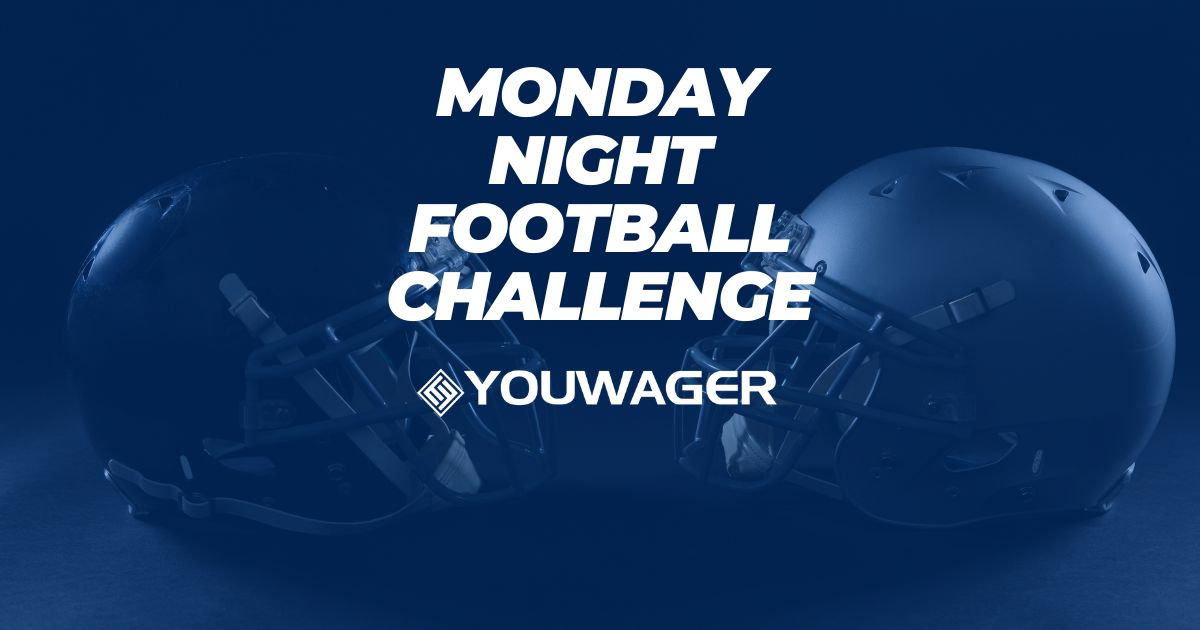 Win a $10,000 Free Play with our Monday Night Football Challenge.

To participate in our Monday Night Football Challenge, you need to guess the exact score of the MNF game.

That’s it! It’s as simple as that.

Here is how you can play our Monday Night Football Challenge:

These are the terms and conditions for our Monday Night Football Challenge:

Once the game is over, if there is more than one winner, the prize will be split.

Every client of YouWager.lv can submit only a single entry. Only the last saved score entered will be considered valid.

Your entry for the MNF challenge must be submitted no later than 15 minutes before the kick-off time.

You are free to participate. That being said, you must have a minimum of $200 in your account balance, or an equivalent amount in pending bets when the score gets submitted.

You must have placed a minimum of three wagers in the previous seven days.

If you win, the prize will be added to your account within 48 hours after the game has been completed.

This is a promo valid only for recreational players.

You must submit your scores online.

This is a Free Play promo, so this FP balance can’t be converted to cash.

There is NO ROLLOVER attached to the prize.

If you wish to win our Monday Night Football Challenge, you must know how to bet on the NFL.

Let’s start by saying that professional football in the United States is a sport with a lot of parity.

This is because this is the sport with the best player salary cap management, not only in America but in the world.

This is great because it means that all teams can always get A-caliber prospects added to their roster. And this is always a sign of hope for even the worst franchises.

Get the best results when participating in our Monday Night Football Challenge by knowing the NFL fundamentals.

As mentioned before, the NFL is a league where a lot of parity exists. This means that the level of talent is very similar from team to team.

But the teams with the deepest pockets will go the extra mile and hire the best coaches, and preparation specialists and will also acquire the latest technology.

Apart from spending cash to get an edge over rivals, NFL teams also pay attention to these fundamentals.

Midweek, you can sit down in front of your computer and start analyzing roster moves, injury reports, and also:

When checking on weather conditions related to a particular game, you must pay attention to:

It’s also important to consider that different player will react differently to the current weather conditions.

A clear example is Hall of Famer Troy Aikman, who expressed that he is not comfortable gripping a wet ball.

Also, games, where winds are 20 miles per hour or more, have a negative impact on the performance of the QB.

Let’s not forget about home teams that are used to playing under bad conditions such as rain or snow.
These teams definitely have an edge over a rival that usually plays and practices under sunny conditions.

For example, a team like the Jaguars, from a sunny city like Jacksonville will hate it when they have to go on the road to play, let’s say the Bills when the snow is present.

It’s also important to mention that a pass-heavy offensive line counts with a better advantage under challenging conditions than a team whose offense is run-heavy.

A great tip when you have a game where the wind will be a significant factor is to bet the Under.

Traveling is also one of the top elements to consider before placing a bet. This is mainly because the home team is well rested in contrast to the visitors, whom are likely tired from the trip.

Bye weeks are essential to decide who are you betting on. The reason is that the more rested a player is, the higher the quality of his game will be.

A bye week is also important for coaches as it allows them to improve their game plans.

Injuries are key when it comes to picking up the best wagering selection.

And the reason is that a significant injury to a top player from the roster can lead to a very different result.

If you wish to do well when participating in our Monday Night Football Challenge, you must also be familiarized with NFL Point Spreads.

When placing a football bet, the majority of the American betting public chooses NFL Point Spreads instead of money lines.

Now, the key numbers related to NFL Point Spreads are definitely 3 and 7.

And the reason for this is that these two numbers decide most NFL games.

In fact, 3 points are the most common winning margin in the National Football League.

Here is a good example:

Let’s say the Bengals are playing the Jaguars.

Jacksonville scored two touchdowns and only a single field goal.

In this case, the Bengals won the game 20-17, with 3 points being the difference.

After three and seven, the most relevant numbers are 4 and 6.

When you place a bet, you definitely want to stay away from key numbers.

Why? Simple: these numbers can be the difference between a push and a win.

NFL Point Spreads: Get The Hook

Now, getting an extra half a point or a full extra point is what is known as a hook.

So, let’s say that by researching wagering lines for the Bengals, you find them at -3.

If you can, you should avoid betting on this particular line, and instead, you should buy half a point to have a line at -2.5.

The reason is that 3 is the most common winning margin, and your bet will end up in a push.

And this is mostly because of the local noisy crowds and the psychological impact on the rival.

Most importantly, when the home team is in possession of the ball, the crowd won’t make any noise to allow for extra concentration.

This allows the quarterback to listen without problem to the helmet calls from the offensive coordinator. And then, the quarterback will share those instructions with his teammates.

Now, the contrary will happen when the visiting team has possession as the locals will start screaming as much as possible.

So, just know that sportsbooks definitely take into consideration home-field advantage as one of the factors when creating NFL Point Spreads.

When you’re placing bets, don’t focus on favorites only as there is a lot of value in betting underdogs.

Now, if you’re to bet underdogs, it’s even better when those are divisional dogs as you get a profitable edge.

What this is telling us is that divisional dogs tend to lose less than non-divisional underdogs.

One of the main reasons for this is that divisional foes play each other often during a given season.

This means that divisional squads are very familiarized with each other, and this allows underdog teams to play with extra confidence versus those teams that are considered the favorites in the division.

And things get extra better when it comes to road divisional dogs as these teams are 53% against the spread since 2003. This is compared to 47.9% for non-divisional road squads.

Thank you for checking our article on participating in our Monday Night Football Challenge!