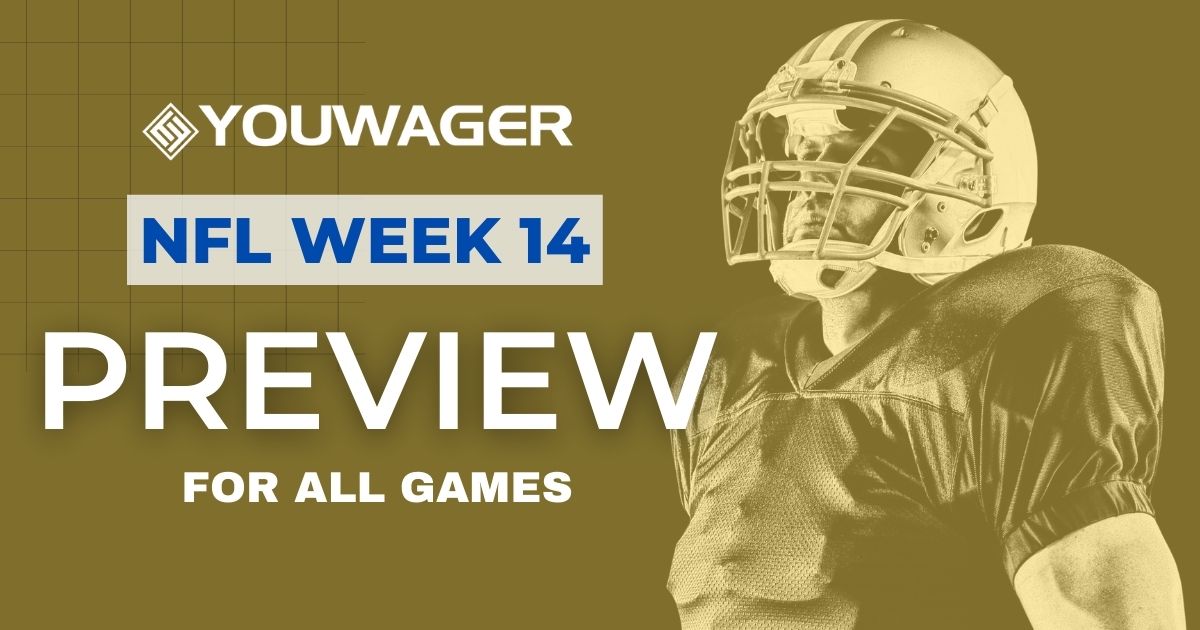 Here’s our NFL Week 14 Betting Preview for each and every game. This info will give you the chance to make good decisions when placing a bet on the underdog or the favorite, the spread, or the money line.

This was their second straight victory, meaning that their hopes of making it to the postseason remain barely alive.

Last season they were able to finish with a four-victory streak. But, if they wish to make it to the next stage, they will need to double that up.

Davante Adams continues to be a dominant figure, finishing with eight catches for 177 yards and two touchdowns in the victory.

The Rams got defeated 27-23 by the Seahawks in week 13. This was actually the sixth defeat in a row for this LA team.

If they lose one more game, the reigning champs can pretty much say goodbye to the postseason.

Despite their large number of injuries, they didn’t play terribly bad on Sunday, but luck is not on their side this season, and they lost once again.

The Jets engaged in a back-and-forth matchup versus the Vikings and ultimately lost the road game 27-22.

This includes two interceptions that were costly as the team was very near the red zone.

The Bills managed to dominate the Patriots in week 13 and won the game 24-10, improving their record for the season to 9-3.

Buffalo are the AFC East leaders, and they can get away even further from their rivals with another divisional victory.

Quarterback Josh Allen is not playing at his 100% as he’s still recovering from an injury.

Cleveland defeated the Texans in week 13 thanks to an impressive defensive performance.

In fact, the D-line for the Browns was responsible for all of their team’s 3 touchdowns.

This game saw the return of Deshaun Watson as the starter for the team. And needless to say, this was a disappointing, inefficient comeback.

If they don’t manage to improve before Sunday, they will suffer versus a stronger team like the Bengals.

Joe Burrow continues to be undefeated versus Patrick Mahomes as Cincinnati defeated the Chiefs in week 13 and improved to 8-4 on the year.

The Bengals are now tied for the first position in the AFC North with the Ravens.

Cincy was losing the game 24-17 entering the fourth quarter, but they were able to score ten unanswered points to finally get the win.

JaMarr Chase is back in the starting lineup, and he led all wide receivers with seven catches for 97 yards.

Houston got defeated by Cleveland in week 13, and their record for the season couldn’t be worst at 1-10-1.

This was just a bad game for the Texans’ offensive line as they turned the ball four times, with three of those getting returned for touchdowns.

Despite the defeat, there were a few bright spots, too.

The team displayed a good defensive game, and their offense allowed zero sacks.

The Cowboys totally embarrassed Indianapolis in week 13, handing them a 51-19 loss.

Now Dallas truly seems like one of the most dangerous squads in the league, with their d-line allowing just 14 points per game in the previous three weeks of action.

Let’s add to that an offensive line that’s currently scorching hot, with Elliot and Pollard having the chance to combine for 300 yards in week 14 versus Houston.

Minnesota defeated the Jets 27-22 in what was a thrilling week 13 showdown between these two franchises.

The victory allowed the Vikings to improve to 10-2 on the year, and now they hold a five-game lead over their NFC North rivals.

Minnesota has the option of clinching the division if they’re able to defeat Detroit in week 14.

They already defeated the Lions 28-24 earlier in the season, but this time the game will take place in Detroit.

Regardless if they win or lose this game, the Vikings are likely to take their division title.

This team is now 4-1 in their previous five matchups, with just a three-point defeat to the Bills.

Now that this team is playing with consistency, they definitely have a shot at making it to the postseason as a wild card team.

A victory in week 14 will boost those postseason odds.

Jacksonville moved a step backward in week 13 as they got defeated by Detroit.

The Jags had been building momentum previous to this defeat, but they played terribly versus the Lions, losing the game 41-14 and dropping to 4-8 on the year.

This squad will try its best to get back on track versus Tennessee.

The Titans were also handed a pretty bad defeat as they lost 35-10 in week 13.

This was definitely a performance to be concerned about by Tennessee, who got defeated for the second straight time, dropping to 7-5 on the season.

The Titans likely won’t have a problem winning a terrible AFC South, but the concerns are focused on their ability to beat good teams.

In fact, they have just one victory over a postseason team, the Commanders.

Philly managed to dominate Tennessee on Sunday, and they are now 11-1 on the season, currently the best record in the NFL.

The Eagles will be able to clinch a postseason spot if they beat New York, but they definitely need to work more if they want to take their division.

They were behind in the score early in the game versus the Commanders, but they got back on track and managed to send the game to OT.

They were not able to score a field goal as overtime was expiring, and that’s why they finished with a tie.

Despite starting the season positively, the Giants now seem to be collapsing, and their chances of making it the postseason are lighter with each week that passes.

Despite getting the victory, this is a team that has looked average at most lately, and they truly can’t afford to get complacent.

If they don’t improve, they are in danger of suffering a late-season collapse, just like last season.

Starter Lamar Jackson suffered an injury in the game versus Denver, and this only complicates things even more for this squad.

The Steelers got a much-needed victory over the Falcons and managed to improve to 5-7 on the season.

This squad has now won three of their previous four matchups, and this includes two road wins in a row.

Although it has been their d-line that has taken command during these games as they have benefited from the return of TJ Watt, their offensive line has also seen some improvement lately.

Rookie quarterback Kenny Pickett is also improving with each week that passes, and the Steelers can actually get an extra victory here.

Kansas City got handed a defeat by the Bengals in week 13 and they failed to get their revenge for their AFC Championship game loss from last season.

The Chiefs were leading entering the fourth quarter of action, but they got shut down for the last 15 minutes, ultimately falling 27-24 to Cincinnati.

Patrick Mahomes finished this matchup with modest figures, going 16 for 27 for 233 yards and a single touchdown.

The Broncos are experiencing a season to forget about as they are now 3-9 after losing to the Ravens in week 13.

They managed to get the first points of the game versus Baltimore, then they led the game for 53 minutes straight, but they ultimately underperformed for the last 28 seconds, allowing Baltimore to cap off a 91-yard drive with a touchdown.

Thanks to a late surge in the game, the Bucs managed to defeat the Saints 17-16 in week 13.

The team was trailing 16-3 with only eight minutes left in the game. Then they managed to score 2 unanswered TDs to finally get the victory.

Tampa Bay is now the sole leader of the NFC South, and is currently 6-6 on the year.

The remaining of their schedule for the season is not getting any easier as they will be playing the Niners and Cincinnati next.

San Francisco managed to defeat the Dolphins 33-17 in week 13, and that allowed them to improve to 8-4 on the year.

The 49ers have now managed to win five games in a row, and they feature one of the league’s most solid d-lines.

On the negative side, starter Jimmy Garoppolo won’t be playing anymore for the rest of their schedule as he suffered a season-ending injury.

It was Brock Purdy who took over for Garoppolo, and he finished 25 for 37 for 210, two touchdowns, and a single interception.

Carolina enjoyed their bye in week 13 and they are currently 4-8 on the year.

Heading into the bye, the Panthers seem to be heading in the right direction as they won two of their previous three.

Baker Mayfield is officially out of the team after underperforming compared to teammates Sam Darnold and PJ Walker.

Needless to say, Mayfield is likely to play backup at a different team for the rest of his career.

But, despite the victory, we could witness a few concerning factors about Seattle.

That being said, a victory is a victory, and the team managed to improve to 7-5 on the season, now being even closer to clinching a postseason berth.

The star of the team continues to be quarterback Geno Smith.

Even with rookie Brock Purdy taking over the injured Jimmy Garoppolo, the Dolphins were unable to defeat the 49ers in week 13.

This was a significant loss for Miami as this is their first loss with a healthy Tua Tagovailoa as their starter.

Wide receiver Tyreek Hill finished the game with nine catches for 146 yards and a single touchdown in the defeat.

Hill currently leads the entire league in receiving, with 96 receptions for 1379 yards in twelve matchups so far.

Los Angeles was not able to defeat Las Vegas in week 13 and they are now 6-6 on the season.

The Chargers, once again, underperformed, this was in direct relationship with the high level of talent on their roster.

They are just a single matchup away from securing a postseason spot, but this is not a safe thing, particularly because they have a tough schedule ahead of them.

If they get defeated by the Fins in week 14, their chances of making it to the playoffs will be reduced from 30% to only 12%.

Needless to say, a defeat to Miami can be the fatal blow they don’t need.

This is a team that is close to clinching a postseason spot, but they still need to win some key games to have a chance in what’s a very competitive AFC Conference race.

Their offensive line managed to just 242 yards in total in week 13, and this despite not turning the ball over.

They definitely need to be extra consistent in week 14 versus Arizona if they want to remain in contention.

The Cardinals were on their bye in week 13 and they remain 4-8 on the year.

They are near being at full strength with their offense, with Marquise Brown, DeAndre Hopkins, and Kyler Murray all back in the starting lineup.

On the negative side, Arizona currently has less than a one percent chance of making it to the postseason.

Thank you for checking out our NFL Week 14 Betting preview!